Follow Tran Hung Dao Street to the three-way crossroad of Trai Ham, then turn right to Tran Quang Dieu Street, visitors will reach the Palace I, where after the French returned to hold power (1948 ) and established Reigning Dynasty Earth (1950 ). Bao Dai King used it as general headquarters and a workplace with government officials in his “territory”. 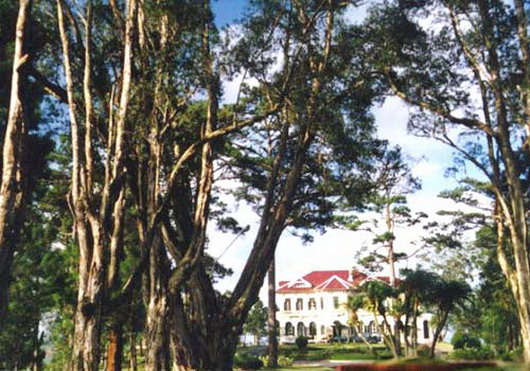 Located about 4 km in the east -south, on a poetic hill with 1.550m elevation surrounded by pine forests, Palace I is a unique architecture in its ancient appearance, majesty and elegance that someone once visiting must give admiration of its luxurious beauty. Originally it was home of a French officer named Robert Clément Bourgery; On January 8th 1949,  Bao Dai King found this place is quite and  nice so that he had bought it and renovated the entire palace. 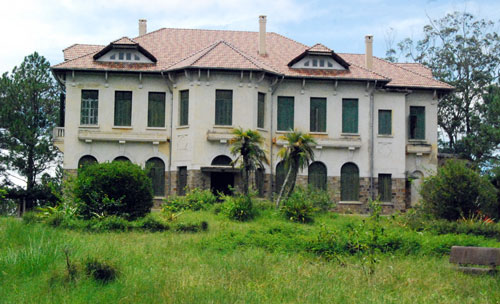 When rebuilding the Palace, workers discovered a secret tunnel which is located directly behind the Palace I, connects Palace 2, and is 4km long with shunts in 11 villas 11, 16, 18, 26, etc. It’s believed that the Japanese had dug it before the stage of coup d’états in order that they took alive French officers in General Headquarters as well as in the other villas.

Palace II, a summer Palace of the Governor Decoux, also known as the Governor Palace, is Decoux’s house and workplace as well in the summer of each year, from May to October. 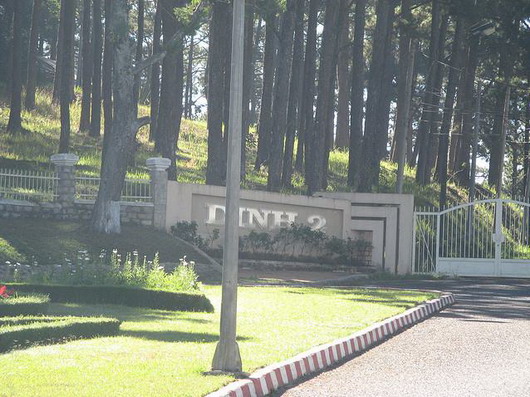 Situated on a shady hill at an altitude of 1.540m,  on Tran Hung Dao Street, about 2km from the center of Dalat in the southeast,  Palace II, built in 1933 as a magnificent castle, contains 25 rooms with the luxury interior decoration. Standing here, visitors can see Xuan Huong Lake about 1km away appearing vaguely under thick pine needles.

After deciding to work here, Decoux had to build solid secret tunnels to ensure absolute safety for him and his family. The tunnels which are about 1.5m wide and 1m height connected to the cellar with many strong nooks.

Under Ngo Dinh Diem Dynasty, Palace II became a pleasure villa of Ngo Dinh Nhu’s family. In 1964 when Gen. Nguyen Khanh to hold power in the chaotic times,  he  chose Palace II as headquarter in the holiday season and he ordered to make renovations and construction of secret tunnels on the hillside in the East- South and North-West in case of the stage a coup d’états.

Place III or Bao Dai’s Summer Palace was used as a retreat by the family of King Bao Dai, the last king of Vietnam.  Located on Trieu Viet Vuong Street, 2km from the center of Dalat city in the south west on a high hill of 1539 m, Palace III was built from 1933 to 1937, the cube-like art deco exterior angled away from the entrance point, disguises the true size of the palace, which contains 25 rooms and 2 upper- storey built within the colonial architectural framework. The ground floor contains the public rooms for visiting dignitaries, including a large formal dining room and library. Upstairs are the private living quarters of the family, including the bedrooms of the King, Queen, Princes and Princesses. The palace is surprisingly simple, showing the modest lifestyle of the King. 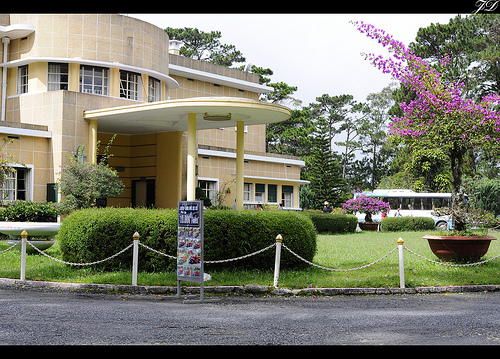 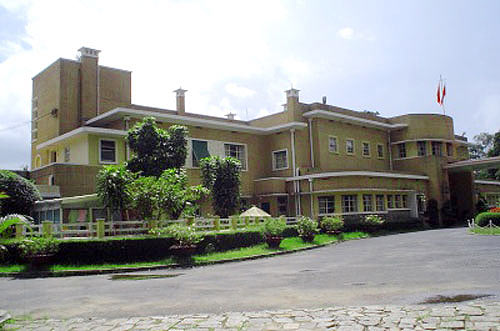 The palace was built from 1933 to 1938 by a French architect and a Vietnamese architect Huynh Tan Phat. Palace III is considered a beautiful elegant palace in a pure pine forest. There are also other architectures such as an architectural landscape park, royal gardens, An Ai forest and a small lake intertwining very reasonably and poetically. The Palace located on a hilltop was belonging to that in refurbishment project of architect Hébrard. This hill has an elevation of 1539m on Trieu Viet Vuong Street. 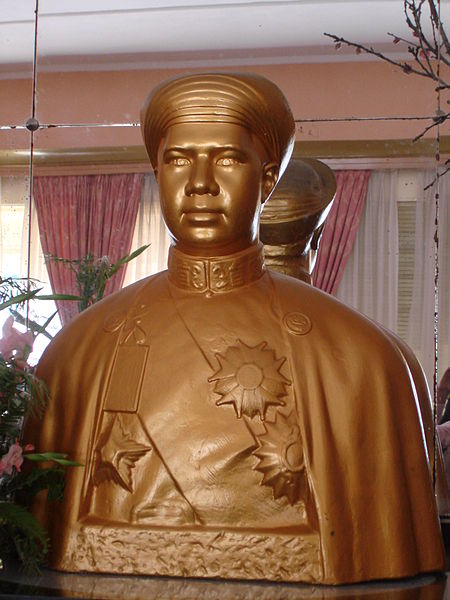 The statue of Bao Dai King

To the architectural form, Palace III is also one of the movement’s influences on architecture innovation in Europe. The point to note here is that in the right side and behind the palace gates is a garden’ its style is familiar to gardens in the palaces of the French, according to geometric layouts. 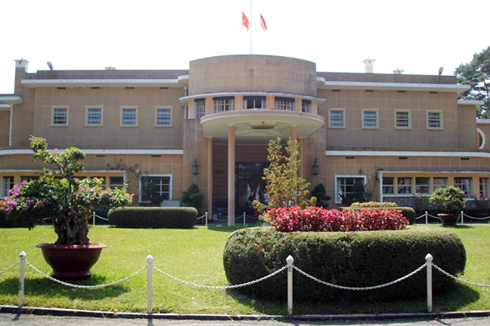 Here planted many beautiful pruned trees, those precious pink bloom clusters throughout the year according to the layout through two axes of symmetry. There is a large flowerpot in front of the palace well cared. The small walking paths around the palace are beneath pine canopies, alternating between green grasses. 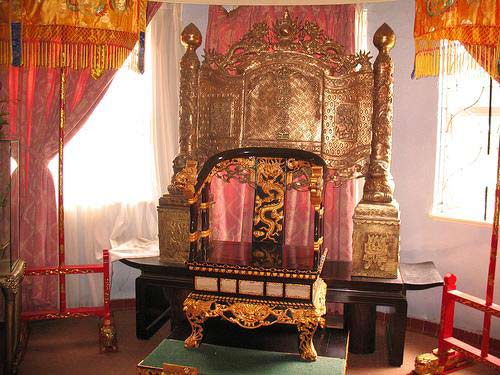 The throne of Bao Dai King in Palace III 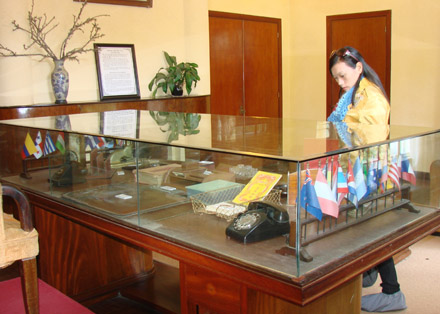 In Bao Dai’s office, the life-size white but above the bookcase is of Bao Dai himself; the smaller gold and brown busts are of his father, Emperor Khai Dinh. Note the heaven brass royal seal (on the right) and military seal (on the left). The photographs over the fire-place are of (from left to right) Bao Dai, his elder son, Bao long (in uniform), and Empress Nam Phuong. The room of Bao Long is decorated in yellow, the royal color. The huge semirural couch was used by the emperor and empress for family meeting, during which their three daughters were seated in the pink chairs and their two sons on the yellow chairs. The bedroom of Bao Dai King has a terrace doors also called Vong Nguyet Lau. Standing here, visitors can see gardens, promenades, hills and valleys in the distance. Planks are still the main material for tiles stairs, floors and stairs of the palace interior decoration. Palace III is a beautiful structures, associated with a particular historical period of Vietnam. 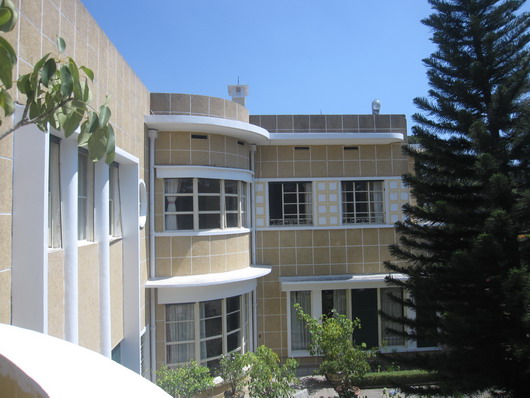 Obviously, all palaces which are located on the tops of high hills occupying a large area are covered with pine forests. The structure is just a gently outstanding feature in harmony with nature. Thus, all the palaces in Dalat regardless of their differently architectural form have shared the mutual values, and especially live in harmony with the natural elements.